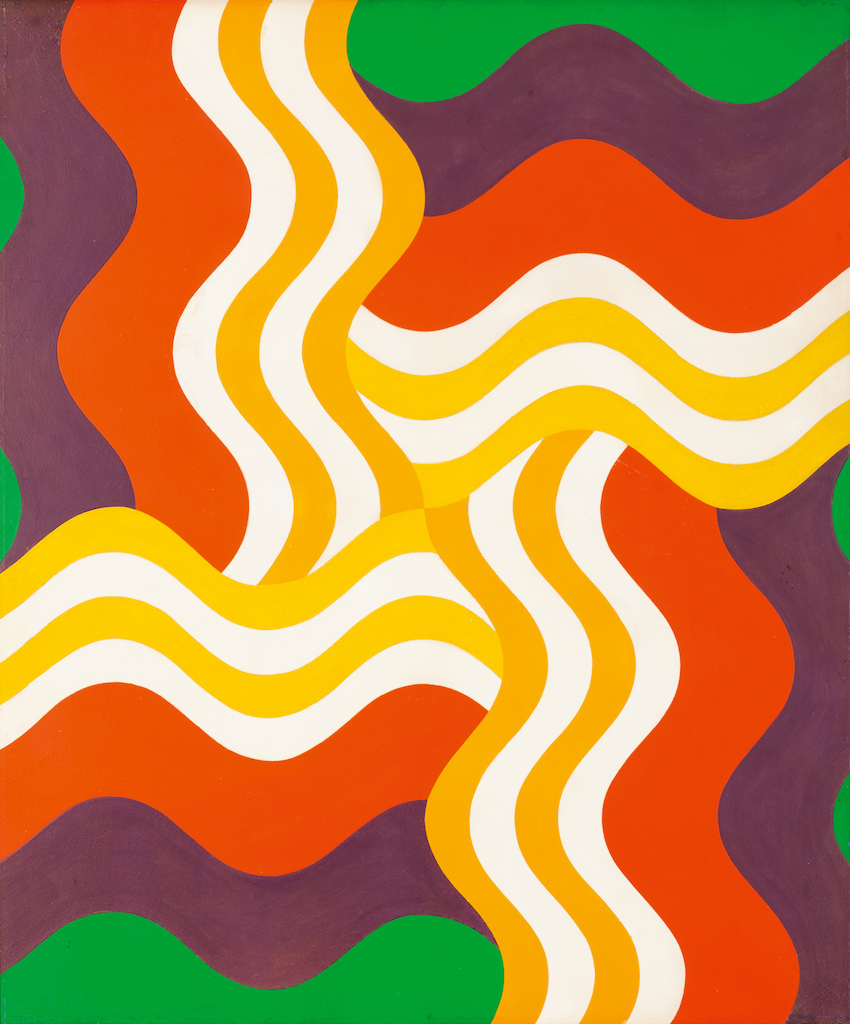 The exhibit features works never before exhibited or published and, in the digital world, that aren’t even available online. Mandy Sinclair checks out the retrospective one Sunday morning during the curator’s tour at the Museum of African Contemporary Art Al Maaden.

Following on the success of the show at The Mosaic Rooms in London, New Waves: Mohamed Melehi and the Casablanca Art School Archives exhibition has arrived at the Museum of African Contemporary Art Al Maaden (MACAAL) in Marrakech. Presented over five rooms, the exhibit follows Mohamed Melehi from Rome to New York City and back to Morocco (Casablanca to be specific where he taught painting, sculpture, and collage at the Casablanca Ecole des Beaux-Art from 1964), and the influence of Afro-Berberism and Postcolonial Architecture. 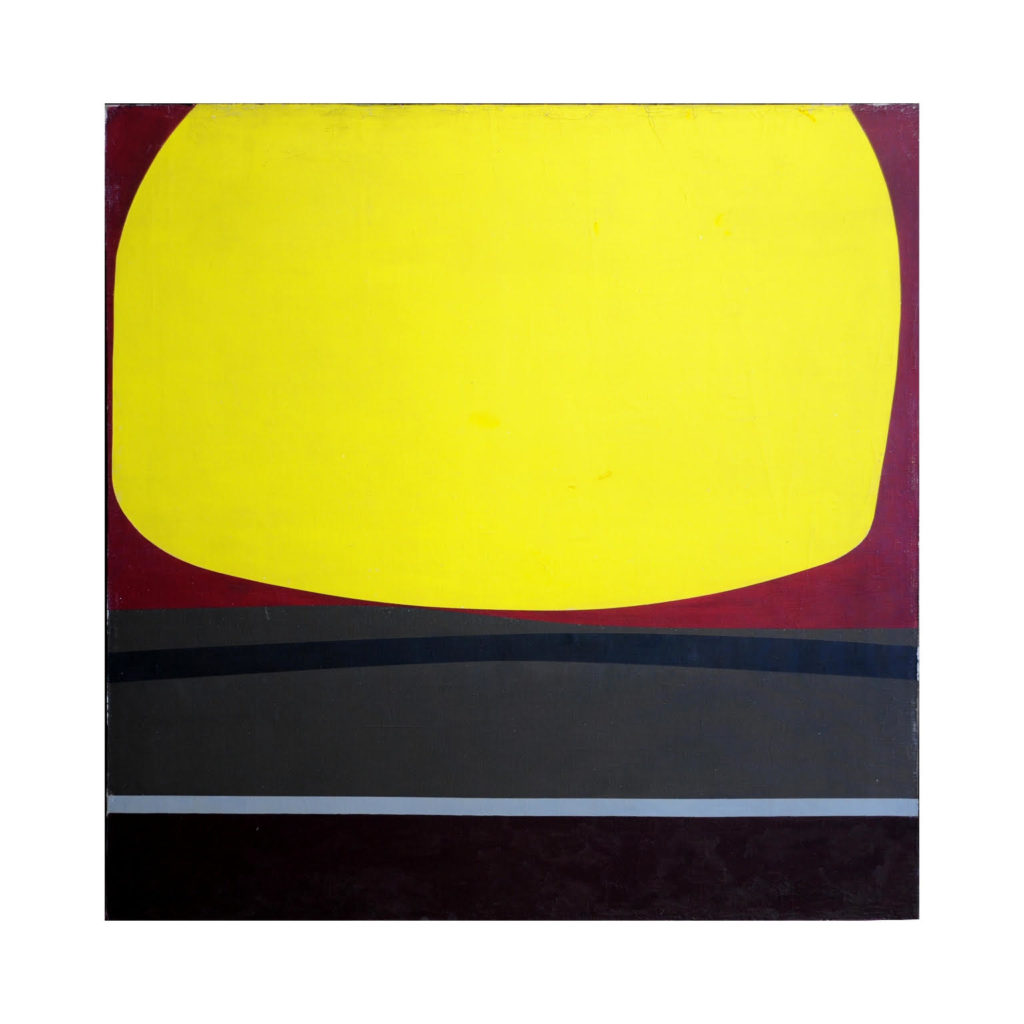 The first room, 1957 – 1965 From Rome to New York City: Primary Structures and Soft Edge Painting, we see the artist’s minimalist style emerge using geometric forms in monochromatic tones, typical of the modernist style. But it wasn’t long before colour made its way in to his works with Melehi establishing a more “soft-edge” style with flowing curves replacing hard-edge angles. In fact, the artworks on display at MACAAL and previously exhibited at MoMA in New York as part of the Hard Edge and Geometric Painting exhibition in 1963, show evidence of Melehi’s new style emerging and, as curator Morad Montazami points out the round-edge sun depicted in Solar Nostalgia II represents the sun and light the artist grew accustom to living in Tangier, but missed stateside.

Transformative years, it was also during this time that Melehi installed an artwork in the cafeteria at the Minneapolis School of Art where he was an assistant professor, a practice he would continue upon his return to Morocco.

As Montazami explains during the curatorial tour, waves are seen as a symbol of movement, mobility, modernity. An interesting details given the artist returned to postcolonial Morocco less than 10 years after independence.

Timely, this year also marks the fiftieth anniversary of the School’s efforts to transcend schools, museums and galleries to take their artworks directly to the people. During a weeklong exhibition in 1969 in Jemaa el Fna where performance arts are on display throughout the day, the School organized an outdoor exhibition which later moved to Casablanca as well because “ten years after independence nothing had been organized for and by artists in Morocco to create not only conditions for their own visibility, but to strive to make ‘modern art’ a key element of everyday life and community life,” as printed in the exhibition booklet distributed at MACAAL.

Stepping in to the second room dedicated the period 1964 – 1978 and documenting Melehi’s return from New York City to Casablanca, a colour explosion and iconic soft-edge waves provide the backdrop display for the graphic design projects Melehi produced – exhibition posters, prints, and covers for the avant-garde journals Integral and Souffles. On the cornering wall, photographs of Berber culture in rural Morocco – painted ceilings featuring motifs, architecture and silver jewelry.

As a professor at the Casablanca Art School, students and artists were encouraged to return to African and Berber sources, to take a closer look at the traditional textiles and rugs, jewellery and painted ceilings, the creativity on display in every day life and in every day places including the mosques and zaouiyas, and to draw similarities between these art forms and modernism.

But it wasn’t just rural areas that provided a source of inspiration. A city streetscape photograph depicting an auto parts shop with its shop front incorporating geometric shapes in its décor also provided inspiration and allied with the modernist language.

And so like the creativity that existed, and still exists in every day life (the shop front is easily found down the back streets of Gueliz, Marrakech’s new town), Melehi’s works became “integrated art”, artwork for decorative purposes that could be integrated in to any space similar to the Berber and African arts – carpets, painted ceilings, jewellery! The ceiling of a once bustling (Brutalism) hotel in Kalaat M’Gouna became a fresco featuring a riot of colour and psychedelic geometric forms.

Lastly, don’t miss the small, but impressive, exhibition space housing artefacts from the Tiskiwin Museum to witness first-hand examples of the Berber and African arts and crafts Melehi encouraged students to study, alongside contemporary artists.

The MACAAL is open Tuesday to Sunday from 10 a.m. to 6 p.m. and entrance is 40Dhs. Keep an eye on the museum’s Instagram or website for side events throughout the duration of the exhibition.

The Tiskiwin Museum, located at 8 Rue de la Bahia just steps away from the Bahia Palace in the Marrakech medina worth a visit for the impressive collection of Afro-Berber arts on display