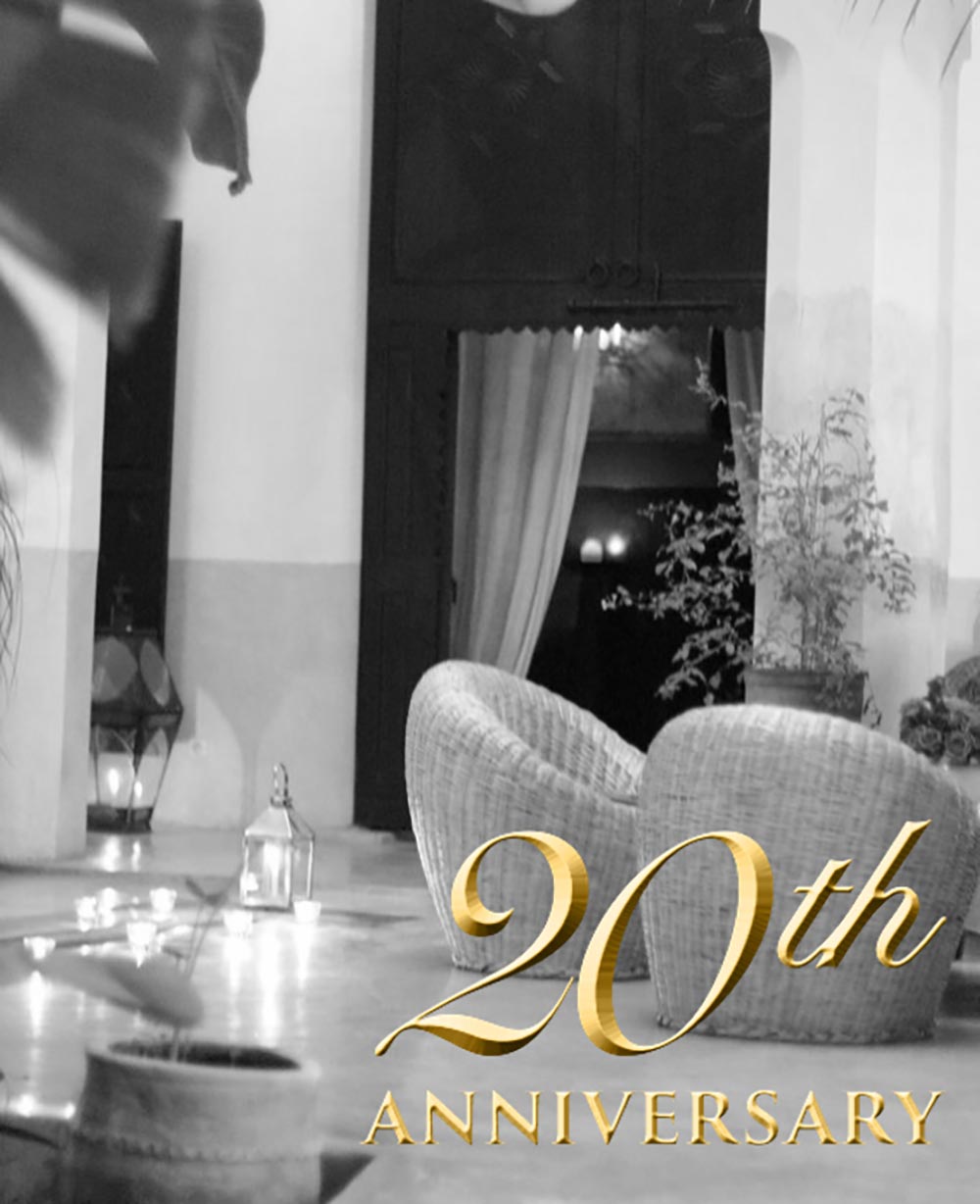 First, this year the 72 palace celebrates its 100 years history!

The construction of the original ancient building was completed on June 1921. The palace belonged to a good friend of Pasha El Glaoui, who built it with the aim of making one of the richest and tallest in the medina. Challenging the Pasha in a game between them about who would build the highest palace, thanks to their friendship he managed to obtain a special building permit exclusively granted to the royal family members. Still today, the building offers one the most breath taking views the Medina has to offer.

The original building is sold in 1999 to Giovanna, the current and unique owner. In just a few years is comprehensively renovated, becoming a jewel of contemporary architecture and art space. It boasts a truly brilliant combination of the quintessential mix of Moroccan style which Giovanna has sensitively respected and Italian impeccable stylish and tasteful flair.

Officially the 72 open its doors in 2021 with the first original 4 vast rooms and quickly becomes an acclaimed boutique hotel. Thirteen years after its opening new 3 rooms enriched the Riad offer bringing to light the sumptuous Moroccan roots with a dose of serious minimalist glamour. Finally, in 2017, in a record-breaking 1 exact year, the construction of an annex is completed with this final upgrade of additional 6 rooms, everything works superbly making for an overall impression of artful and effortless elegance. By this point, the 72 Riad Living has even more ways to wow its Clients, best interpreting that trend of increasingly sophisticated home design thriving in the Red City.

So, let’s ignite this second milestone anniversary! This year 72 celebrates 20 years of delivering rich and meaningful experiences to its Clients. When hotels recognize landmark years, it’s their guests who get the gifts! To mark its 20th platinum anniversary, 72 will kick off a wealth of new offerings. Starting immediately and with more announcements on the way throughout the rest of the year. From now to the entire coming Summer up to September 21st, 72 will give out the special deal “three-night stay for two”.

In addition to this special anniversary room package, 72 offers many other privileges including complimentary room upgrade (subject to availability) or late check out with an anniversary cupcake upon arrival.

“We have spent 20 years creating an oasis where guests can travel and stay in style, and we haven’t lost our thirst for improvement,” concludes Giovanna.  “Whilst we value and preserve our traditions, we will continue to develop new and innovative approaches to hospitality, so while celebrating our past this year, we can also look forward to a bright future.” After completing the expansion of 72 Riad Living Hotel in 2018, increasing its room count to 14, we are craving a new very ambitious project, now living, which includes adding adjoining vast areas for a special new restaurant concept, pools and SPA centre. “We’re on our way” Giovanna warns us. Stay tuned!

For more information or inquiries please use 72@riadliving.com. To finalize your anniversary booking, please add the code platinum20th.