A chat with Hassan Hajjaj in the lead up to the 1:54 Contemporary African Art Fair

A chat with Hassan Hajjaj in the lead up to the 1:54 Contemporary African Art Fair 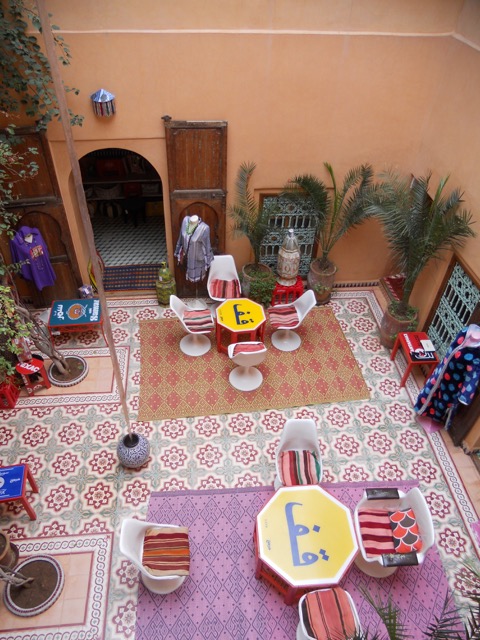 29 Apr A chat with Hassan Hajjaj in the lead up to the 1:54 Contemporary African Art Fair

It was a sunny Friday afternoon in February and I had arrived at artist Hassan Hajjaj’s curated installation Mi Casa Su Casa housed inside the Comptoir des Mines art gallery in the centre of Gueliz to record an episode of my Why Morocco podcast. It was the lead up to the 1:54 Contemporary African Art Fair and everyone – gallery owners, artists, and curators – seemed to preparing for the fast-approaching the second edition of the four-day art fair in Marrakech.

Despite this, Hassan made time to speak with me about what he was planning in the space as part of the event. We sat on Coca-Cola crates topped with cushions decorated with the familiar LV logo as we sipped tea; the noise from the street picked up on the recording (after all, we were in one of the most exciting areas of the new city). As the sign at the entrance indicates, the installation is designed “to depict my home as an artist, showing how I live and work.”

While one might assume he would decorate with his own artworks, but as Hassan explained in my podcast, he decorated the apartment as if he were living in it. And if so, he wouldn’t hang his own artworks, but rather pieces he admired by fellow artists. Artworks by promising Moroccan photographers – Yoriyas, Meriem Yin and Amine Oulmakki to name a few – adorn the walls alongside a few artworks by the artist himself.

Tip: Don’t miss the bedroom space, my favourite room in the one-bedroom apartment.

For those who know his artworks, they are easily identifiable by his use of globally identifiable brands – Gucci, Louis Vuitton, Barbie – set in a local context. As Hassan says during the Why Morocco podcast interview of the use of these brands in his artworks: “it’s just there. You go to the market and you see a guy driving a dustbin with a donkey and he’s got a Louis Vuitton cap, Supreme cap for example.”

And it’s true – wander through the medina where women are carrying Louis Vuitton, Michael Kors and Gucci handbags. In the souks, footballs made from Louis Vuitton fabric retail in small shops.

What I found truly interesting was the amount of time required to produce each photo shoot. With photos of Madonna, Will Smith and Maria Sharapova popping up on his Instagram feed of late, I, perhaps foolishly, thought they could be turned around quite quickly. But I learned that the shoots can take months to source the materials, work with the tailors and find the right blend.

Flash-forward to the opening evening of the 1:54 in Marrakech on Thursday 21 February and if you weren’t at Comptoir des Mines in central Gueliz, one might wonder, where were you? The three-storey building was packed with viewers taking in the African Poetry exhibition that sprawled throughout the gallery, taking viewers on a voyage through an imagined melancholy where Moroccan artists addressed themes felt throughout Africa: the fight against time, living according to traditions and authority, and confronting invisible struggles.

Perhaps the loudest and most lively area was Hajjaj’s exhibition space as visitors danced, sang along and captured the music of the traditional female band for their social media feeds. And while the party sprawled out on to the balcony, there seemed to be no noise complaints here from neighbours. It may because everyone – young and old, visitors to the city and locals who call Marrakech home – crowded together, soaking up the festive ambiance.

Guests staying at Riad Living are invited to join us for an ARTI NG event – a guided contemporary art tour in Marrakech to discover galleries, museums and artists’ studios. This tour of selected studios and contemporary cultural venues is perfect for both art lovers and serious buyers. Guided by a professional team, visitors will leave with an insight into artistic life in Marrakech.