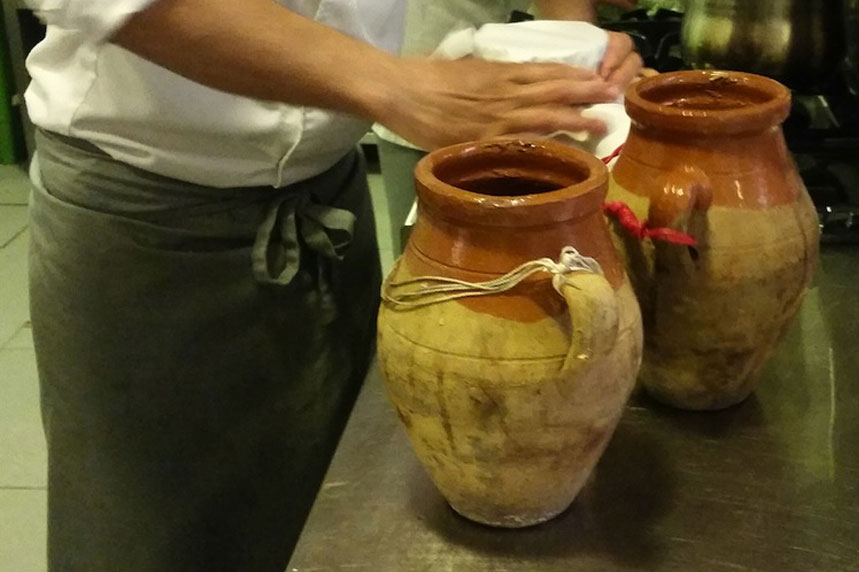 Not to be confused with tajine, this flavourful dish of lamb or beef is popular with tourists from across Morocco vacationing in Marrakech and a must-try dish for foreign tourists.

As I stepped in to the kitchen at Riad 72, chef Mustapha was preparing several pots of tanjia for the guests at Riad 72.

Quick to prepare and cooked externally, tanjia is a popular with and often prepared by men. Server Rachid notes that it’s often the dish of choice for groups of men picnicking in the Marrakech countryside as it is prepared early morning and ready in time for an afternoon out.

I watched Mustapha as he prepared the vessels. For each half a kilogram of meat per person (beef or lamb), Mustapha tossed in half of a preserved lemon, three cloves of garlic, a pinch of saffron, half a teaspoon of cumin, half a cup of olive oil, a small cup of water and a tablespoon of butter.

With the assistance of Rachid, Mustapha put the final touches on the tanjias and together they covered the earthenware pots with paper pulled tightly and tied with rope to prevent any dust from entering. After, Aziz whisked the pots off to the local farnatchi where the meat is slow-cooked until tender and falls off the bone. In fact, the kitchen team were eager to explain that not all tanjia is prepared the same.

Some chefs however prefer to cook tanjia in a pressure cooker, resulting a meat that is tougher and not as enjoyable to eat the kitchen crew explains.

When served, if a blackened paper cover is removed from the pot, chances are you’re having a dish that was slow-cooked all day, and hence the reason why most restaurants required several hours notice. The meat is also tender, darker and with a smoky flavour.

Grab your bread and enjoy!