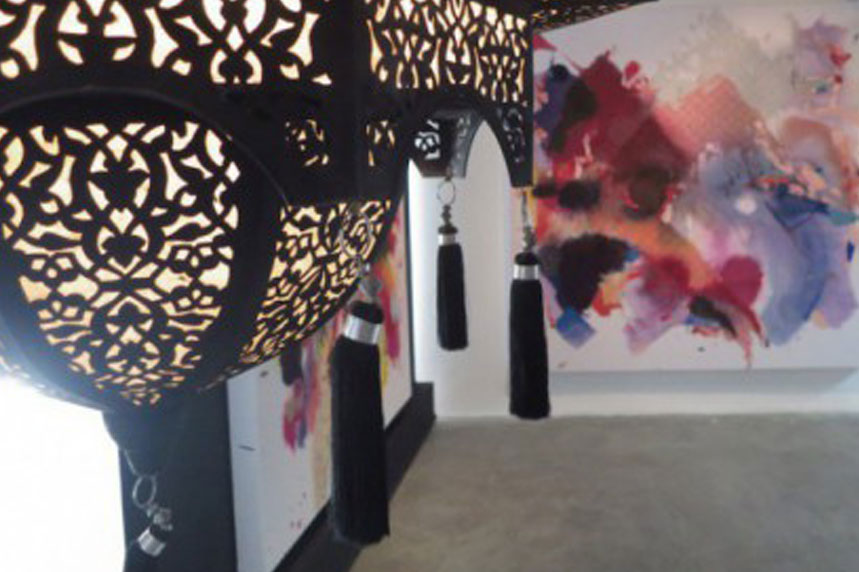 Based on Farid ud-Din Attar’s series of poems La Conference des oiseaux, Yassine YAZE Mekhnache’s exhibit of the same name visualizes the adventure and journey the group of birds took using silks and embroidery from India as well as traditional Fassi embroidery from Morocco. After two years in the making, the exhibition is opening on Friday 27 February 2015 at the David Bloch Gallery in Marrakech.

I had a chance to go behind the scenes just hours after the installation was completed to chat with the artist about the 30 pieces he created as part of this series, of which several are on display.

From the moment I stepped inside the gallery, I was in awe. YAZE’s personal interpretation of this poem based on an internal voyage is brought to life using splashes of bright colours in pinks and purples with elements of figurative drawing underneath, intricately embroidered birds in silvers and golds hand-stitched in traditional Fassi embroidery techniques mix brilliantly with the glittery sequins and beads hand-stitched by embroiders in India.

Two years in the making

The process starts with YAZE painting the image on paper to provide a template for the local embroiderer (in Morocco YAZE works with local women in Tameslothe, near Marrakech). While YAZE explains the painting is done quite quickly (the tableaus presented in the gallery were created in three weeks), the embroidery included in each piece takes between 300-400 hours.

“We don’t use machines in the process, everything is done by hand. I met the artists in 2007 during a residence with Mahi BineBine, I needed to go to visit the artists and they made me a little gift. I went to them without knowing what would become of the meeting. But it was the start of our collaboration,” explains YAZE.

Once the textiles were completed YAZE assembled the abstract works at Dar Al’Mamoun in three weeks.

The series contains some thirty to forty works with the launch of selected works here in Morocco before a show at the Grand Palais in Paris. For YAZE, it was important to launch the series here in Morocco. “I’ve been working here for seven years and I’ve never had a personal exhibit,” he says.

LA CONFERENCE DES OISEAUX is on display now until 24 March 2015.